Combating inequalities in the city: diagnoses and proposals

The FCE and the AMB organize the second session of the conference "Fighting inequalities in the city". 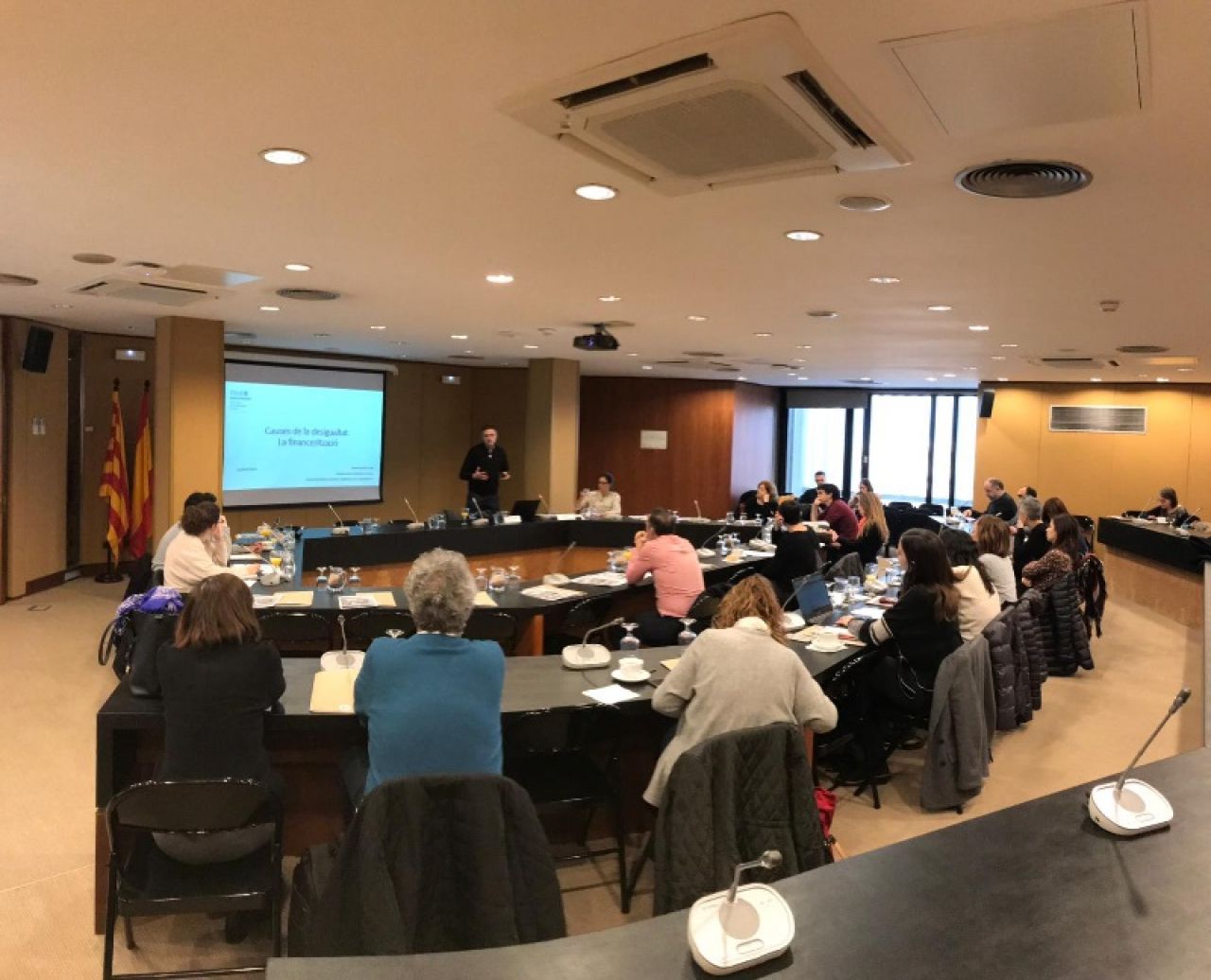 The second session of "Combating inequalities in the city", organized by the Fundació Catalunya Europa and AMB, deepened on the structural causes of inequality and the possible solutions to this growing reality with the participation of experts from the academic sphere and two mayors of the metropolitan area, Raquel Sànchez (Gavà) and Lluïsa Moret (Sant Boi de Llobregat.) This formation is part of a training plan of 3 sessions for mayors and municipal technicians of the Metropolitan Area.

David Murillo, a professor of social sciences at ESADE, opened the session, showing how, overall, there is an increase in income differences between 1% of the richest population and the remaining 99%. On the causes of this phenomenon Murillo pointed to the tax reduction and the tax evasion paths that benefit people with higher incomes and large commercial companies. This fact makes the tax effort fall on salaried people and small and medium-sized businesses.

Faced with this increase in inequality, Murillo proposed several multilevel measures such as curbing the great power of financial entities, protecting certain markets, betting on a moderate globalization, promoting a system of redistribution of the trade surplus, creating alliances against tax havens, improve global governance and focus on fiscal inequality.

Marisol García, professor of sociology at the UB, also participated in this session of "Combating inequalities" focusing on inequalities in cities. For Garcia, redistribution policies are essential to guarantee social justice. The sociology professor emphasized on the term "social innovation", understood as the ability of citizens to improve the welfare. In this sense, it is important to establish a dialogue between the different actors of a city, this is, the administration, the associative movement or the business sector.

Xavier Martínez-Celorrio, currently adviser of the Minister of Education and FP and member of the CRIT (UB) also participated on the session. Celorrio considers that the economic dispossession of the middle and working classes is a cocktail that favors the emergence of the extreme right and the identity wars that camouflage inequalities and blame migration.

Faced with these challenges, Celorrio considers that the municipalities are very limited. For this reason, he argued that it is important that  the metropolitan area discusses about innovation and strategies that allow the social inheritance of poverty be fought. It is also necessary that the municipalities win in political competitions to have more capacity to fight against inequalities.

The third part of the session was given by Pere Almeda, professor of political science at the UB and coordinator of the series of conferences "Fighting inequalities." For Almeda, talking about meritocracy is talking about a deceit. Economic inequality is widespread and has an inevitable part, but inequality levels are controllable. For Almeda, policies aimed at combating inequalities must be carried out in a multilevel fashion. Specifically, at the municipal level, it would be necessary to create an integral strategy for the reduction of inequalities at the municipal level that involve the different municipal areas, the third sector, social movements and academic sectors.

The closing of the day was given by the mayor of Gavà, Raquel Sànchez and the mayor of Sant Boi de Llobregat, Lluïsa Moret. Both agreed on the importance of carrying out policies of sustainable urban development, understood from a transversal perspective, taking into account factors as diverse as ecology, economic and social levels and democratic participation.